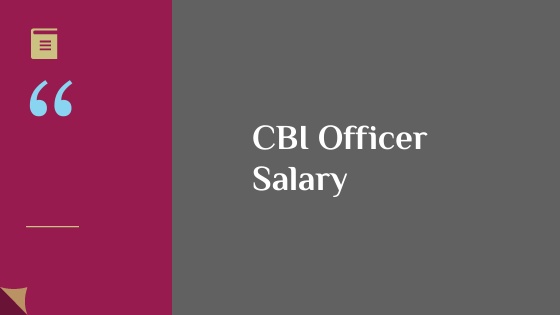 Central Bureau Investigation, CBI is an agency that investigates all the special crime cases in India. The association comes under Public Grievances, Ministry of Personnel, Pensions of the administration. In 1941 the Indian government found this investigation agency to look over the Economic Crimes, Criminal Investigation, and Prosecution Body. The majority of the youth dream of becoming an officer in CBI, therefore all the details like how to become a CBI officer, their salary, eligibility everything is discussed below.

How to become a CBI officer?

To become a CBI officer, Two different examinations are conducted i.e. UPSC and SSC by different agencies. To join as group A officer i.e. the post of DSP (Deputy Supdt. Of police), the examination conducted is UPSC.

To become a Sub Inspector in CBI, choose the SSC CGL examination. After passing the exam, clear the next four stages then you’ll get the post of SP in CBI. Another is the IPS officer, bring decent rank in UPSC such that you can get the post of IPS officer.

As talked over above about the examination followed by the stages to become SI in CBI. So the procedures are:

In the initial exam, 200 questions are asked and the paper is divided into different sections i.e. General Awareness and General Intelligence, Arithmetic Ability.

To become a Sub Inspector in CBI, there is a physical fitness test.

Height: 165cm and 159cm for men and women accordingly.
Chest: 76cms for men and no criteria for women.
EyeSight

As a CBI Officer of India that does the work of Economic Crimes, Criminal Investigation and Prosecution Body is a very tough job. Therefore, the government gives a decent salary with additional benefits to the CBI officers.

The salary of subinspector in CBI:

And Special Allowance, Medical facility is also given.

Do CBI officers have uniforms?

CBI officers are generally outfitted in normal clothes. But before 2012, the common people started taking advantage of the name CBI by defrauding money and committing crimes.

Thus, when this news was highlighted, the CBI director concluded on setting CBI jackets for the CBI officers so that nobody can do any crime or fraud. The CBI officers jackets are blue with CBI printed on it.

What does a CBI officer do?

CBI is recognized to inspect many crimes such as corruption crime, economic crimes, Criminal investigations, Prosecution Body and many other special high-profile crimes. Because of this speciality, many youths are interested to be a CBI official.

Who has more power CBI or police?

CBI and Police both are strong in their respective places. CBI has restricted political interference and thus they are specialists in handling high-profile cases. Police have more political interference with the concern of getting discontinued and transfers than CBI that’s why they are given to handle every case. Thus, from viewpoint of people, the police considered more powerful

Can a CBI officer carry a gun?

The major task of CBI officers is an investigation that doesn’t need a gun to take with them everywhere. They handle cases like corruption crimes, Criminal investigations, etc and they are not similar to normal investigators therefore a CBI officer doesn’t carry a gun. Certain cases involve special crimes are put on to CBI for investigation, in such cases CBI are required to carry guns with them.

Service guns are kept at all the CBI Officer’s benches to use wherever urgent. Glock pistol made in the US is the basic gun the CBI officers keep. Not all 5000 personnel of CBI take guns with them, simply the law officers and some officers who are in the investigation team take guns whenever necessary.

Is the CBI inspector a Gazetted officer?

The managerial/executive grade ranked officers in India are recognized to be Gazetted, Officers. Main private documents are given to gazetted officers of CBI only.

Also Read: How to write an appointment letter