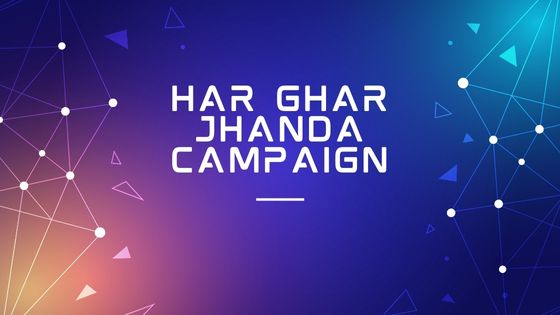 On August 15, the “Har Ghar Jhanda Campaign” will be introduced, encouraging people to hoist our national flag “tiranga” over their houses. The program will be a component of the ongoing Azadi Ka Amrit Mahotsav (AKAM), a celebration and commemoration of India’s 75th independence.

The Indian National Flag is a representation of the entire country’s pride in itself. The program “Har Ghar Jhanda Campaign” has been approved by the hon’ble home minister, who is in charge of all initiatives under Azadi Ka Amrit Mahotsav, to further honor our flag. It aims to motivate Indians all around the world to raise the flag at their residences.

Bringing the flag home as a nation in the 75th year of independence becomes symbolic of both our commitment to nation-building and our act of personal connection to the Tiranga. The purpose of the initiative is to instill a sense of patriotism in the hearts of the people.

Plans are being made, according to Union Minister of Culture and Tourism G Kishan Reddy, to hoist the Tiranga at roughly 2,000 monuments nationwide that are under ASI protection. Additionally, the Archaeological Survey of India (ASI) will be involved in encouraging numerous residents of the area around protected sites to take part in the effort. It is intended that individuals will buy their flags to feel a sense of pride.

According to the “Har Ghar Jhanda Campaign,” there are some laws and regulations that must be obeyed, as set forth by the Flag Code of India, 2002, as the Center prepares for 15 August and wants to see the Tiranga unfurled at every hour. Before this, The Emblems and Names (Prevention of Improper Use) Act of 1950 and The Prevention of Insults to National Honour Act of 1971 controlled how the national flag should be flown. As long as the flag’s honour and dignity are upheld, the 2002 rule permits the display of the Tricolour without restriction.

In Har Ghar Tiranga Campaign, “The Prevention of Insults to National Honour Act 1971”, should be observed:

Per the law, anyone found to have insulted the Tiranga faces a fine and a prison sentence of up to three years for a first offence.

The National Flag must be hoisted on public buildings per Section III of Part III of the Flag Code of India from dawn to sunset every day, regardless of the weather. It should be swiftly raised and carefully dropped.

How should the Indian National Flag be displayed alongside those of other countries?

The National Flag is hoisted first, then the flags of the other nations in a clockwise motion, if the flags are flown in a closed circle formation. The National Flag should be on the right and its staff should be in front of the staff of the other flag when they are exhibited against a wall with their staffs crossed. The flag masts must be the same size whenever the national flag is flown alongside those of other countries.

The purpose of the Har Ghar Jhanda Campaign, launched by the federal government to commemorate the 75th anniversary of India’s independence, is to instil a sense of patriotism in the hearts of its people and raise awareness of the national flag. So, let’s participate and show respect for our nation.

Also read: How to Hide Apps in Android Phones