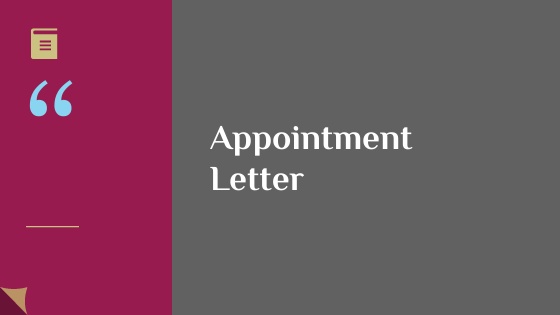 The appointment letter is a certificate given to the nominee who has cracked the interview and has been given a designation.

The document shows the assurance of a selection for a specific  The company handouts the letter to the candidate for whatever the post may be such as an auditor, accountant, software professional, and many more for an internship.

After people apply for the job, they give an interview and are entered into the company through a selection process. After analyzing everything of the candidates, the selected candidates are sent an appointment letter at their address, that expresses that he/she has been selected for…….. (Post). Every description regarding the job is interpreted in the letter.

The name of the candidate, its designation, date of joining, working hours, salary, job location, bonuses, terms, and conditions are included in the appointment letter.

The letter can be made use by a Company’s or HR Manager of the company proposing a job to forthcoming employment.

The letter is written formally and consists of all those matters that were not spoken of during employment, the work hours, and the daily tasks and responsibilities that have to be done for the expansion of the company.

The letter act as a piece of documentary evidence to get their rights and benefits as an employer. There is no prominent law that compels the compulsory allotment of appointment letters, but some states have a law to mandatory mention the details of the candidate in the letter.

How to write an appointment letter?

To write an appointment letter, follow a proper format so that it appears to be formal. Follow the steps described below to write the letter.

Check out the proper format:

Described above are the things to be kept in mind while writing the letter and now we’ll see the proper format of the letter.

You have been appointed on…… (designation name) with……. Company. We are grateful and looking forward to your contribution to the company.

Employment location : (The address of the office in which the post has been appointed and if the location changes as per time).

Sign our offer according to our terms and conditions, and we are looking ahead to work together.

The process of appointing a new employee to work includes recruitment, interview, appointment and after the candidates get selected, the appointment letter is sent to the candidate as a confirmation that they have been selected in the company. So, let’s look at the format

According to your interview, you have been selected to work with the organization on the……..(designation) position. So, under the subsequent terms and conditions, we are being grateful to you to join from the date (…..).

Salary: The salary that has been proposed to the candidate at the time of the interview.

Working hours:  Working Days in a week, hours to work, lunch break, everything is mentioned.

Leave Policy: Give the details of the number of leaves permitted in a year. Details of all types of leaves i.e. casual leave, sick leave, earned leave, etc.

Notice Period Clause: If the appointed employee wishes to resign from the company, he/she must attend to the notice periods according to the statement of the company in the appointment letter.