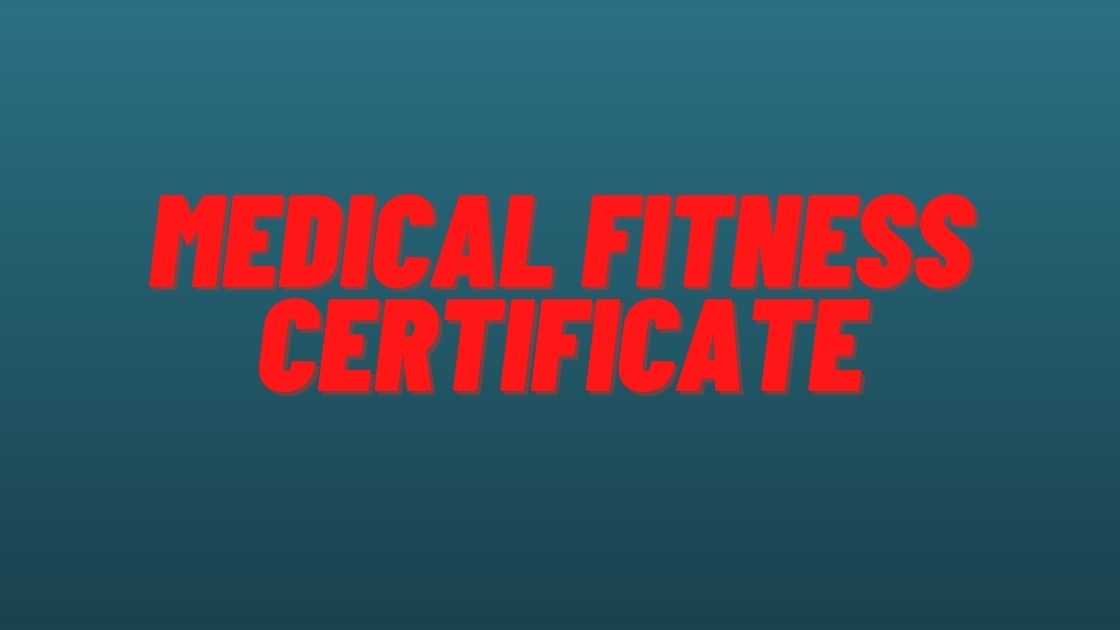 Medical Fitness Certificate is the certificate of medical fitness who works in Government, and private and other services for their health report. To ensure that one person, is physically as well as mentally sound in health, is admitted to any service.

All appointing authorities are, however, advised to ensure that this does not result in a delay in issuing offers of appointments to the candidates recommended by the UPSC/SSC an employee as “not fit” for appointment to the post specified, the services of the employee should, subject to the provisions of the Ministry of Health Office Memorandum No. 5-35/55-1111 dated the 13th December 1965 be terminated forthwith.

Though medical opinion should not declare a candidate as “fit for temporary employment”, it sometimes happens that a candidate is declared “temporarily unfit” as requiring re-examination after a specified period in cases where the condition of temporary unfitness is curable in a reasonable period.

It has been decided that in such cases, there should be no objection to a Government servant declared “temporarily unfit” physically being retained in service for the period specified by the competent medical authority provided that:

A person who is appointed to Government service afresh after a break Inservice -not. -exceeding one year should be treated as in continuous service for the” purpose of these orders, – the periods of the break not being counted. If, however, -the period of break. exceeds one year, he should be regarded as a fresh entrant to Government service.

The following classes of Government servants are exempted from producing a medical certificate of health:

(1) A Government servant recruited through a competitive examination who had to undergo a medical examination in accordance with the regulations prescribed for appointment to service under Government.

(2) A qualified student of the Thomason college, Roorkee, permanently appointed to the Public Works Department within 18 months from the date of the health certificate granted to him on the completion of the College course.

(3) A Government servant appointed in a temporary vacancy for a period not exceeding three months. 5(3-A) A Class IV Government servant of the Indian Posts and Telegraphs Department confirmed in his grade before the 15th May 1942 on promotion to Class III service. subject to his being examined for communicable diseases.

(4) A temporary Government servant, who has already been medically examined in one office, if transferred to another office without a break in his service.

Medical examination before undergoing training It has been decided that candidates entering the subordinate service in the Post and Telegraphs Department must produce the medical fitness certificate before undergoing the prescribed training.

How do I get a medical fitness certificate?

How to fill a medical fitness certificate?

http://www.manuu.ac.in/EmployeeCorner/Medical%20Unfit%20and%20Fitness%20Certificate%20formats_19Jan18.pdf  fill this MFC form with your detailed answers.

Who can give a physical fitness certificate?

Well qualified physicians or who work in medical care centers in the form of written statements can give medical fitness certificates or doctors certificates to patients. It can serve as a sick note or any health issue evidence for the medical examination of a sick patient.

Read About\\ Domicile Certificate: What it is and how to get?